Fedor Emelianenko has just surprised no-one by knocking out a much aged and worn down Pedro Rizzo, but Rizzo is still no slouch on the feet, and the The Last Emeperor’s striking discipline continued along it’s upward trend. While many of his hardcore fans, myself included, would like to see Fedor return to his varied striking to grappling style, Fedor did fight exactly as he should now that he is past his best. Fedor fought intelligently, in a measured manner, and out thought Rizzo. Fedor looked every bit the technical striker, even hooking off of the jab. The finishing combination was a perfect example of a set up immediately paying dividends, and effective set ups are something we see far too little of in MMA. If you haven’t read my piece on Fedor’s striking, please check it out.

Fedor threw a hard low kick at the Brazilian, coincidentally a man known for his own, powerful low kicks. Then Fedor lifted his foot, faking the kick but instead stepped in with a powerful right hand. Similar to a superman punch, but accomplished with a step forward rather than a hop into the same stance. The act of establishing the low kick (a fairly safe technique when thrown appropriately), then using this to set up meaningful punches is one that is still underutilized in Mixed Martial Arts. Rizzo was circling away from the Russian’s legendary right hand, and yet the appearance of an approaching low kick made him lift his leg to check, allowing Fedor to strike him down.

After the Jump we’ll look some gifs of Fedor and at Shogun’s excellent use of low kicks to impliment his punching game.

In MMA, the gloves are much smaller than in boxing, so many intelligent fighters learn to move away when the opponent is stepping in rather than trying to block (Dominick Cruz,Lyoto Machida, Anderson Silva are all masterful at this). At lower levels (though still in UFC fights- Matt Riddle vs Sean Pierson being a great example) this leads to fighters running at each other with flurries, falling short on every punch, then running backward away from the opponent’s own attemps at an offensive flurry. A great way to make the opponent stand still is to low kick.

The threat of a low kick forces the opponent to:

The most basic level of low kick to punching set ups is the superman punch – responsible for a great many knockouts of even experienced fighters. Georges St. Pierre still establishes his inside low kick, then uses his superman jab to enter for his takedowns in almost every fight. Jon Jones also distracts better punchers with solid kicks, and is then able to catch them unawares with hand strikes as their footwork slows in anticipation of taking low kicks. Another fighter who, when he is on form, blends kicking with his punching strategy excellently, is Mauricio ‘Shogun’ Rua.

You will notice that I used the phrase “punching game” because Mauricio Rua, despite his own insistence on running at his opponents swinging, is not a good boxer. This was amply demonstrated against Dan Henderson as Rua insisted on trading his right hand for Henderson’s powerful right hand over and over from the start of the bout (rather than circling to his own right and repeatedly falling back on his left hook as a good boxer would). Further to this, despite having powerful hands, Shogun often simply uses the same two wide swinging punches – his overhand right, and his running left hook. When Shogun is at his best is when he is utilizing his excellent kicking technique to force his opponent to compensate with his guard and stance, then nailing them with fast punching flurries.

Shogun’s best recent striking performances have both stemmed largely from his kicking ability – those against the always dangerous and unpredictable puncher Chuck Liddell, and against his nemesis; the karate prodigy Lyoto Machida. Against Liddell, Shogun utilized his kicks to set Chuck’s weight and make him stand still as Shogun landed leaping in punches; culminating in a running left hook knockout off of a faked kick. Against Machida, Shogun countered every Machida assault with a hacking low kick, and wore his fellow countryman down.

The Machida – Shogun bouts are so significant that I will devote time to writing a full breakdown of some of the technical and strategic exchanges in another article at an appropriate time. For now we will look at Shogun’s genius finishing set up on Liddell.

Throughout the first 4 minutes his meeting with Chuck Liddell, Shogun threw a noticeably large number of kicks, mostly to the legs of Liddell, and even attacked with repeated knees to the hamstrings when he took Liddell’s back against the cage. Shogun also landed a great number of lead right swings, simply because Liddell was slowed by the expectation of having to take a low kick, which made him stand firm in his stance whenever Shogun approached. 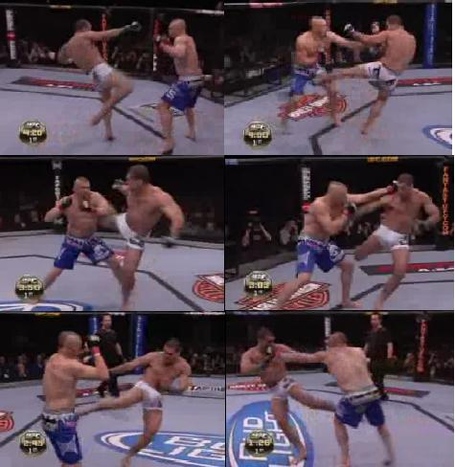 Finally, Shogun sprung the trap in the late stages of the first round. Having established his kicks and his overhand, Shogun had Liddell attempting to stand firm, take the kicks and counter with punches (as you will notice in several of the above images). After a break in action, Shogun faked with his right hip – causing Liddell to stand firm and swing an attempted counter left hook, Shogun then ran forward behind a long, swinging left hook. This left hook, which is thrown while stepping forward with the right foot, is a staple of Shogun’s style, and is what I refer to as a “cheat punch” from my earliest days in karatecompetition. Any left punch that is thrown with a right step forward can be called a cheat punch, and can cover a great deal of distance with more power than a jab or hook straight off the bat would have. For more about cheat punching pick up my ebook, Advanced Striking.

Liddell was circling to his right as Shogun faked the kick, Liddell stopped to throw his counter left hook and brace for the kick, but no kick was forthcoming.

Camera angles and the editing of the slow motion replay make it difficult to see Shogun’s fake with his right hip, but as you can see, Liddell is already attempting to catch Shogun with a counter, which falls short, just before Shogun leaps in with his hook. Liddell used the exact same hook, and his savage right straight, to catch many, many fighters as they came in punching. Junior Dos Santos often uses this left hook to counter his opponent’s kicks. If Shogun had not thrown off Liddell’s mindset and footwork with his kicking game, it is unlikely that he would have been able to fluster Liddell into throwing a miss-timed counter punch when he faked the kick. I advise everyone to hunt down this fight and watch it just for the finishing technique – pictures cannot capture the subtle fake.

Just as Shogun was able to force Liddell to react to his kicks, and throw Liddell off of his game, Fedor was able to use the threat of his kicks to convince Pedro Rizzo, who was doing everything right, to stop circling away from the Russian’s right hand long enough for the Emeperor to land it. Fedor Emelianenko is reported to have retired in the post fight press conference, which is excellent news as the man has had a long and unsurpassed career that is certainly winding down. Mauricio Rua, meanwhile, will be taking on Brandon Vera atUFC on Fox 4.

Jack Slack’s ebook, Advanced Striking, breaks down the techniques of elite strikers in unparalleled detail; including Fedor Emelianenko, Anderson Silva and Junior Dos Santos. Pick it up today and support analysis in the MMA media.