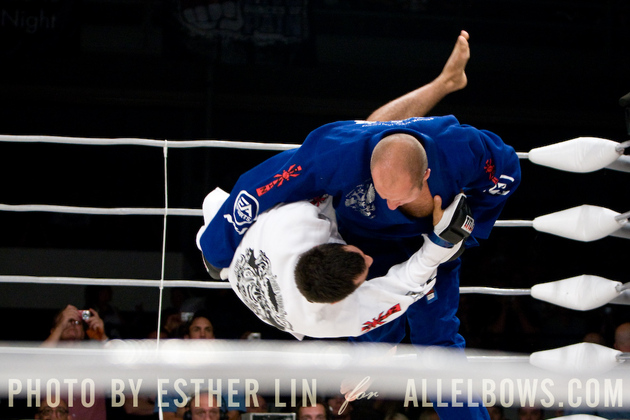 Photo by Esther Lin via allelbows.com

Fedor Emelianenko came to dominance as a judoka, but given his string of knockout wins from 2007 and one dimensional fighting style in recent years, it’s easy to forget this. Introduced to Sambo through a state sponsored program and reportedly anything but naturally gifted, Fedor was reported by his childhood Sambo coach to spend hours in the gym after classes drilling through movements on his own. It was his younger brother, Aleksander, who was the avid boxer of the two to begin with.

Fedor’s earliest MMA matches were almost exclusively judo and sambo clinics, as he rag-dolled the fighters of RINGS’ heavyweight roster. It wasn’t until he came to PRIDE and the referee was no longer stood over him on the ground repeating “no face!” that Emelianenko was able to become the ground and pound machine of his PRIDE years. Having examined Emelianenko’s domination of Heath Herring and Antonio Rodrigo Nogueira with ground and pound in Part 2, and having performed a full technical breakdown of some of the concepts at play in his formidable and unusual striking game in Part 1, the plan in this third installment was to examine Fedor’s throws, trips, entries to the clinch and grappling. That, however, was an enormous task and would result in elements being examined too briefly or in a dissertation length editorial. In this issue instead, we shall focus on the entry to the clinch that I feel made many of Emelianenko’s throws and takedowns so easy for him to perform; The right hand lead.

As a striking exponent myself with a meat and potatoes BJJ game, the majority of my experience in the clinch has been from a Muay Thai perspective and I would not dare to consider my knowledge of Judo or Sambo to be anything worth writing home about. I do, however, consider Fedor’s success in the clinch to be largely due to his effective entrances through strikes. It seems that against everyone but the most wary opponents, Fedor was able to achieve double underhooks or hip control a startlingly high proportion of the time. A look at this gif from his third meeting with Antonio Rodrigo Nogueira will amply demonstrate my point.

Notice how Fedor comes in behind his right hand lead, ducks his head off to his left and wraps his arms straight around Nogueira’s hips. This is Nogueira at his finest; not the shambling, battle worn man we see today, yet Fedor still nails him with a right hand, gains full control of Nogueira’s hips, dives through to a double leg takedown (on Nogueira’s right side, quite unorthodox) and immediately moves to a soccer kick. If I were to show a martial arts student a textbook combination of striking and grappling, this would be it. From a self defense perspective (which we should consider in all martial arts), this sequence is an engagement started and ended in the same two seconds. As a bonus, Fedor is returned to his feet while Nogueira is still on the floor.

To perform feats like this Fedor utilizes what is known as Punch and Clutch. It is a concept I have written about in a little detail before, but really needs further examination, especially by modern MMA fighters. Punch and Clutch is the act of leading with a power punch, then falling into the clinch with an opponent so that one is too close to be hit with a counter punch. It has been used extensively by the light hitting Floyd Mayweather to add more authority to his attacks, and was also utilized by the great Jack Johnson almost exclusively in his attempts to gain an infighting position. 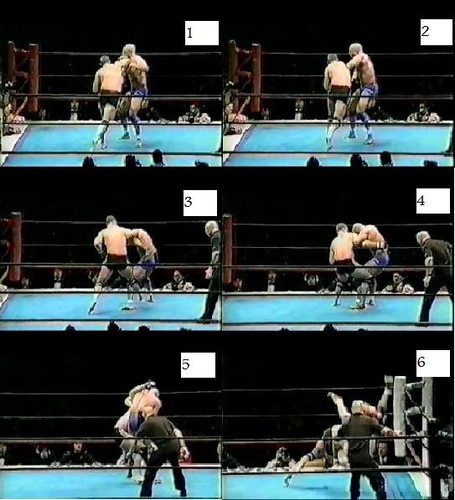 In this storyboard from Fedor’s fight with Lee Hasdell early in his career, you can see his right hand lead in action. On this occasion, just as against Nogueira, he lands it in addition to securing the clinch, but this is not always the case and is not the purpose. Notice in the first frame Fedor has dipped his head to his left and is driving forward in hopes of keeping safe from a counter and securing a chest to chest position. You can see in Frames 2 and 3 that Fedor has no intention of recovering his position or continuing a stand up exchange – rather than drawing his right hand back to his jaw he drops it and underhooks Hasdell’s left arm, while using the momentum of the punch to draw his right foot up behind Hasdell’s left. Hasdell instinctively overhooks while reeling from the punch and tries to turn away from Fedor (Frame 4). Fedor draws his left foot up so that he is almost facing Hasdell again (Frame 5) before lifting Hasdell off the mat and simultaneously reeping Hasdell’s feet with his right leg (Frame 6).

The third meeting between Fedor and Nogueira was much the same story. Nogueira’s wrestling has never been incredible, but he managed to trouble some decent wrestlers, and at least land in a position on the ground that he could work from. Against Fedor he was basically thrown at will by the Emperor, who would often remain standing to avoid his adversary’s formidable guard. 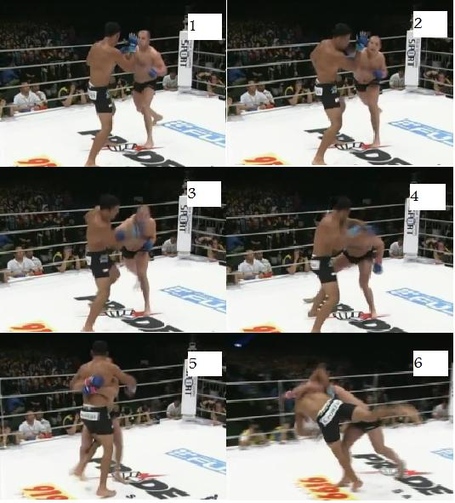 Notice in this sequence that Fedor uses the same entrance that he used on Lee Hasdell but this time on the number 2 heavyweight in the world, Antonio Rodrigo Nogueira. This is also the third time that he utilized this particular entry in the fight and was the fourth throw in the first five minutes – prompting Randy Couture, Bas Rutten and Mauro Ranallo on commentary to remark “[Fedor] just throws him away”. Frames 1 – 3 show Fedor landing his right hand lead then dropping it while diving in. Frame 4 shows Fedor’s ducking into Nogueira, avoiding an instinctive counter left hook thrown by the Brazilian. Figure 5 shows Fedor driving his chest into Nogueira’s chest as he stands up and links his arms in double underhooks.

From this position (with his right leg partially blocking Nogueira’s left) he is able to simply sling Nogueira to the mat. Double underhooks is the standing equivalent of full mount, in that even a semi-competent fighter can utilize it effectively 80% of the time. Even if Fedor didn’t have the incredible Judo pedigree that he does, from Figure 5 he could easily get Nogueira to the mat.

This is a slick alternate version of his go to Punch and Clutch combination that Fedor brought out when Nogueira began to slip the Emperor’s jabs. 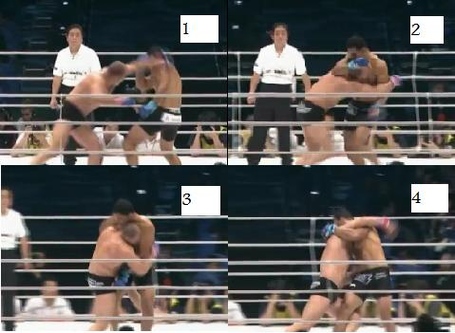 Following his jab, Emelianenko drops his left hand to secure and underhook as he drives his head into Nogueira’s chest as he brings his right foot up (Frame 2). He hasalso trapped the Brazilian’s right arm against his body. As Nogueira is trying to force some distance with this underhook, Fedor then steps his left foot behind Nogueira’s right and hooks it while using his weight to drive the Brazilian over it and to the mat.

Punch and Clutch is something that we don’t see enough of in MMA, even from wrestlers with heavy hands such as Dan Henderson. Many of Fedor’s wild right hands were wild for the very reason that he was diving into a clinch when he performed them, it was not coincidence that he ended up there. Great boxing technique leaves the boxer on balance at all times and prevents him from ending up in an unwanted clinch. But often, great fighting technique does not conform to great boxing technique.

Punching with the lead hand is done at a distance – when finishing a combination boxers are encouraged to finish with a left hook or jab to re-establish the distance and “close the door”. By this reasoning, shooting double legs off of the jab is to shoot a double leg from the furthest possible striking distance. Where this worked in the days of Kevin Randleman andMark Coleman, the improving wrestling of fighters in general make this strategy a fairly predictable one which wastes energy on long shots.

By learning to close the distance with the right hand lead, wrestlers of this generation can learn to get in to the clinch or on their opponent’s hips relatively safely, and have a decent chance of stunning or knocking their opponent out. It is techniques like this one that strengthen the argument that Fedor was ahead of his time, because the wrestlers of today’s heavyweight division still don’t strike into takedowns of the clinch as fluidly and dangerously as he did at his best.

Please support Jack Slack and pick up his ebook “Advanced Striking: Tactics of Boxing, Kickboxing and MMA Masters” which breaks down over 70 striking techniques of 20 of the worlds top fighters in great detail. The techniques of Fedor Emelianenko, Anderson Silva, Alistair Overeem and Junior dos Santos are all present, along with many others.